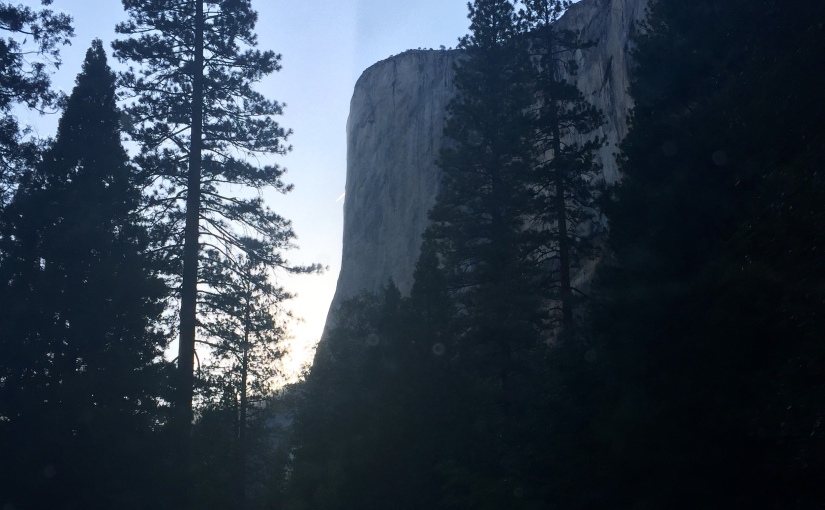 I spent the evening down on the valley floor by the Merced River and Tenaya Creek, past the lingering tourists snapping pictures in the last remaining hours of daylight.

I can’t say what I was looking for–maybe something extraordinary, since extraordinary was all that I had seen so far, and I had little indication that anything about that would change.

The sun faded from view, leaving the sky cast in a pink-purple glow.  The air had cooled quickly, and I heard the sounds of the river somewhere through the trees.

I approached a small tunnel where footprints led through to the other end.  It was actually more like a pile of rocks, and it formed what looked like a cave at first glance. Maybe it was my imagination running away with me, or some childlike adventurous impulse breaking free that I made no effort to resist.

I crawled through it like some lost boy in his bedroom fort, made from chairs and bedsheets.  Only this was the genuine article, made from boulders and chunks of earth that had probably fallen many years ago.

I reached the other end and heard the sounds of the river growing louder.  I could see it flowing in between the trees.  I glanced up and noticed two birds flying playfully overhead.  I followed them to the water, flowing gently northeast.  I sat there on the bank, quietly upon the rocks and I listened.  The ‘river’ was actually Tenaya Creek, which had broken off from the Merced River at Curry Village.

I sat there for a while and wrote about the creek whispering secrets, dispatches from the rest of the world with news on where we were all going from here.  The river seemed to know it all.  The river, swift and wise, the great shaper of mountainsides and treacherous canyons–shaping even the grandest and most mammoth caves in America.

The last rays of daylight had gone down as I left the valley and made my way out the west entrance of the park toward El Portal.  I camped for the night at an RV park, perched on a cliff overlooking the Merced River.

This site was a cool alternative to camping in the park where campsites had been booked for months in advance.  I slept in something that wasn’t quite a tent, but not quite a cabin either.  It was a wide canvas tent the size of a small bedroom, equipped with a bed and nightstand and even a ceiling fan.  I guess it could qualify as ‘glamping,’ though I hadn’t heard that word at the time.  It didn’t have an AC or heating system, but I didn’t need one.  In those first days of August, the air outside was perfect.

I enjoyed all the sounds of nature I would have enjoyed in a conventional tent, as well as most of the comforts of a cabin.  And I fell asleep to the sound of the river rushing below and the many creatures of the night, unknown and unseen.