Lately I’ve been thinking about the song Blowin’ in the Wind.

Like many millions of people, when I first heard it I was moved; and I appreciated the depth and meaning in every line, every question posed by the author, each one pertaining to a fact of human history consistently revealing itself for each new generation.

I couldn’t help but be a little disheartened by the fact that these questions are still so relevant, so many years later.

Yet in the years following my first encounter with the song—for all it’s undeniable eloquence and power—the chorus still struck me as frustratingly flat.

To ask questions like “How many years can some people exist before they’re allowed to be free?” only to say that the answer is blowin’ in the wind, felt a little bit cheap, as though each of us might as well throw up our hands and just say ‘oh well.’

It was the only thing about the song that bugged me.  However, lately I’ve been looking at it differently.

Maybe I’m just slow and people have been hip to it all long, or maybe I’m taking shots in the dark and totally inserting my own meaning into the song, but that chorus means far more to me now than it did before.

The real subject of scrutiny isn’t any one country or group or individual, but something deeper and typically more silent, something to which all of us are vulnerable.

Apathy. The very thing that bothered me about the song might actually be the main point of the song in the first place.

The answer, actually, is not blowing in the wind. If it is, it’s only because we’ve given into the same apathy, hopelessness, bitterness and fear that convinces people to throw up their hands and give up right from the start, and leave it to some unseen force outside of their control.

In the last verse, Dylan writes “How many times must a man look up before he can see the sky?”

There could be a lot of ways to interpret that line, but for me, it’s the one time throughout the song in which the author winks at us, as if to undermine that seemingly disappointing chorus.

As far as we know, there is only a sky above us, and it seems to care little if at all about the affairs of men and women. It will provide no answer to our problems, beyond the possibility of serving as a mirror. One that allows us to recognize that the answer to these questions is in our hands. It always has been and always will be.

To me, that’s a timeless truth. Elemental as the wind. 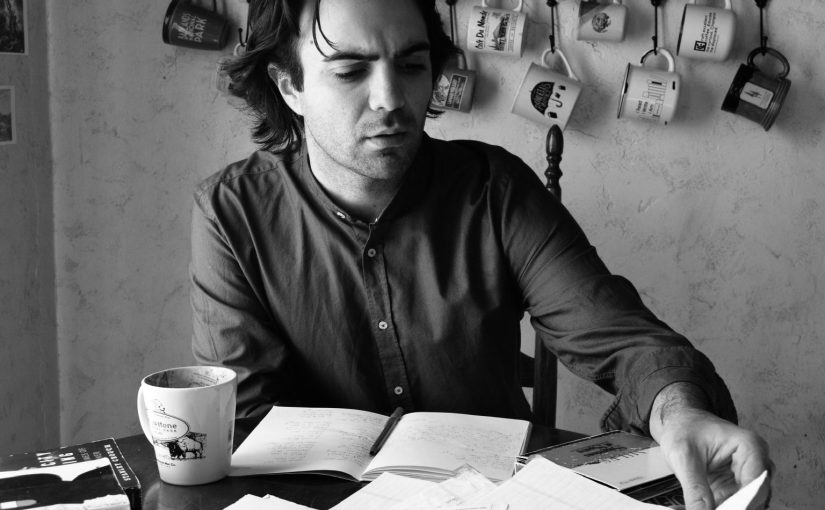 In recent years, as a rising number of voices far more qualified than my own began speaking out on racism from the standpoint of their personal experience, in movements like Black Lives Matter, I thought it more appropriate to speak less and listen more.

While it was mainly an act of deference, it also partly came from a fear that my own voice might further add to what I viewed as a dangerously monotonous chorus perpetuated by social media, a superficial facade of allegiance rooted less in justice and more in fashion, something I saw as alarmingly characteristic among people–particularly in the white community–in this rising technological and social media age.

While this point of view had some merit, it’s one I can no longer fully practice. I’ve had the opportunity to educate myself more deeply over the last few years, and while that experience certainly continues, my silence has reached it’s end.

I am a musician. I play American music. I often play what some people call Roots music. The term is typically used to group together folk music, jazz and the blues—art forms unique to America that shaped the music we enjoy today, an enduring tradition through which we continually express ourselves.

As such, it’s a useful conduit to understanding the broader history and dynamic character of this country. While all communities have shaped and continue to shape that character, it is critical to understand that Black people specifically laid down this country’s foundations—both literally and to a large extent, culturally. For me, a great part of understanding that foundation has been through the music they’ve given to America, and to the world.

This wasn’t an act of mere patronage on my part. It wasn’t done out of pity or wanting to better understand a community that I viewed as separate from my own, much less from me. It was an act of studying my country and by extension, myself. It’s been an intensely personal, at times painful, and ultimately gratifying experience.

Still, as I continue along this road, which often feels cyclical as well as linear, I’ve returned to one specific realization over the past few weeks. It’s simply impossible for me to continue playing American music without actively speaking out against racism. To do so would be a betrayal of my personal and artistic roots and to the generations of people who profoundly shaped our country and way of life, one that I celebrate every time I sing, or strum the guitar.

I recognize that they aren’t my ancestors, but without question, they are my musical forbearers; and I cannot, I will not turn my back on them. To do so would be to turn away from myself.

So while this is just a brief summary of my own personal experience as an artist and American citizen, my ultimate intention is that is serves as a call to action for anyone still ambivalent about their stake in this country, in something bigger than themselves.

We must fully recognize racial justice as a cause relevant to more than just one community, and recognize the necessity of it being no longer their fight, but our fight. What happens to one of us will and should affect the other. The riots in our cities are living proof of that universal reality, and while I don’t advocate violence, I implore everyone to communicate, openly and with respect, preferably face to face.

To abstain is to compromise not only the welfare and prosperity of one people, but the soul and lasting integrity of our country.

Until these virtues are fully realized, so long as people of color continue to suffer under the tyranny of systemic racism, persecution and oppression, we should–at the very least–expect people to kneel when we sing the national anthem.