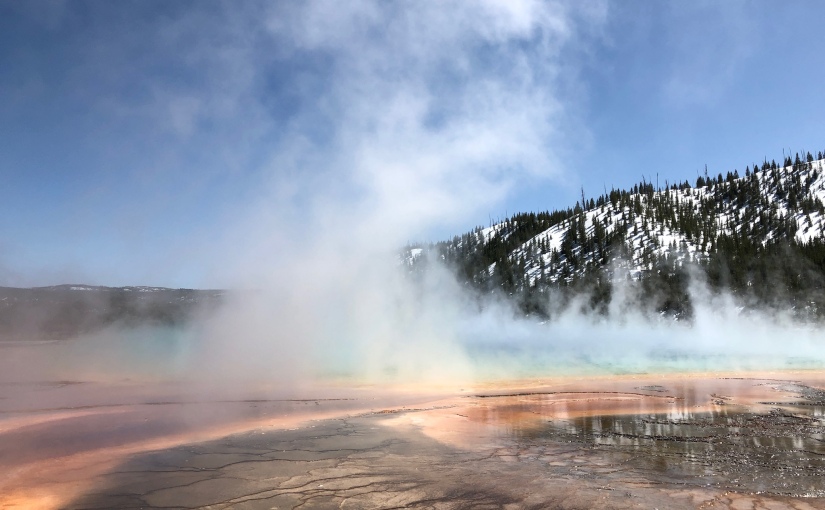 The steam rose ominously from the surface. The pools were clear and strikingly blue, beautiful to look upon like the water in Crater Lake, that collapsed volcano in Oregon whose fresh water continually forms from the annual snowfall.

Crater Lake has its own volcanic history, mostly thousands of years in the past. Here in Yellowstone, of course, that history is ongoing, as its volcano is still very active; and I was constantly reminded of it from the geysers, hot springs and prismatic pools I faced that afternoon. Beautiful indeed, deceptively so. Look at them for long enough and you might feel that slight inclination to jump in. Don’t be fooled by the undeniable beauty. Contact with that boiling water would be excruciating and possibly fatal. I recalled the sirens of Greek mythology, who with their enchanting voices lure sailors to their own shipwrecked doom on the sirens’ rocky shores.

Yellowstone National Park stands atop an active super volcano. Its caldera mainly encompasses the perimeter of the park. Nearly all its marvelous and most defining physical features, like its geysers and springs, are owed to this continuing volcanic activity. The scientific consensus is that we’ll have plenty of indicators, like earthquakes, before an eventual eruption. It’s an ominous fact that’s hard to ignore.

Even so, one can ultimately learn to surrender and embrace the sheer majesty of a place so unique and teeming with life, no matter how volatile the source of that life may seem, or how violent its natural, topographical history. Here you’ll find a precious, expansive wilderness home to a wide variety of wildlife iconic to the American west. The mighty buffalo, the elk, big-horned sheep, wolves, wolverines, bobcats, coyotes, otters, badgers, mountain lions, and of course that solitary king of the mountain, the grizzly bear. And that’s just the wildlife. Yellowstone offers one of the most incredible natural landscapes in all the world that includes a vast array of geysers, Yellowstone Lake, and another one of my personal favorites, that serenely beautiful waterfall cascading down the marvelous Grand Canyon of the Yellowstone.

At Midway Geyser Basin, I continued past a few of the crystal-clear pools on the basin and towards a hulking mass of steam rising from the southern end. As we approached, it blew toward us like a dust storm, enveloping us to the point where we could only see a foot or two in front of us. It cleared for a flashing moment and then thickened again.

The warmth felt nice. A welcome change to the chilly mountain air of the early afternoon. We continued as the steam cleared again at random intervals for short windows of time just long enough for me to get a glimpse of what stood before us. A shot of blue, then orange and red. A wondrous vision that I might have regarded as mere fantasy were I not catching my first glimpses of it right then and there. The steam cleared, and I saw it in full. The Grand Prismatic Spring.

I never lost sight of the fact that I was walking atop an active super volcano, and yet somehow the recognition didn’t fill me with dread but with a rush of joy. My only impulse was to stay and listen and feel, for I felt as close to the planet’s core as I’d ever been and may ever be. I could see it as a threat to my own human existence, or I could view it as a natural part of the living, breathing planet that is my home.

Gratitude eventually cast out any lingering fear. I was grateful for the National Park Service, as I’ve been on so many occasions, for existing, for preserving places like this for us to enjoy and experience. The moment was made all the more poignant by the fact that I was in Yellowstone, our first national park, where I stood face-to-face with the beating heart of the earth. In my own way, I guess I did jump right in after all.

Ren Michael is a singer-songwriter who has traveled throughout the U.S. and Europe, typically returning to Los Angeles where he plays the blues, folk music, rock n’ roll and spoken word/poetry in the clubs, pubs and cafes around town. You can hear is music on Spotify and Soundcloud. View all posts by Ren Michael